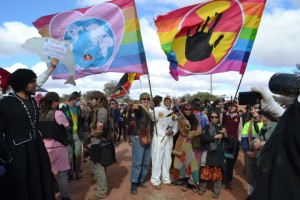 The nuclear industry has and continues to disproportionately affect Aboriginal people in Australia. Traditional owners and Native Title holders have no right in law to veto mining projects and every nuclear waste dump proposal, from Woomera to the current proposal for Wallerberdina Station in the Flinders Ranges, has sought to impose a waste dump on Aboriginal communities without consultation and without the consent of Aboriginal communities that would be most directly affected.

This is a human rights issue. Article 29 (2) of the UN Declaration on the Rights of Indigenous Peoples, which Australia has signed on to states that:

“States shall take effective measures to ensure that no storage or disposal of hazardous materials shall take place in the lands or territories of indigenous peoples without their free, prior and informed consent.”

Similar issues arise for the Olympic Dam mine. Under the Indenture Act, BHP Billiton is completely exempt from the Aboriginal Heritage Act 1988, which is the key piece of legislation protecting Aboriginal Heritage in SA. Instead the company recognises the 1979 version of the Act, which was never made law in SA and provides much weaker protections for Aboriginal heritage. Additionally, BHP is exempt from certain parts of this Act. The effect of these exemptions is that BHP has absolute discretion on what Aboriginal sites are recognised and protected. It is a clear conflict of interest to have a corporation with a commercial interest in a piece of land also making decisions regarding whether this same land has competing non-commercial values

However, the health and environmental impacts of the nuclear industry do not know skin colour. They affect all Australians and will continue to do so for generations.

A Royal Commission has recently recommended that South Australia host an international high level nuclear waste dump, and the Federal government has shortlisted only Wallerberdina Station for further consideration for a national nuclear waste dump. The Olympic Dam mine itself will also eventually become a dump – in the sense that once it is closed, it will leave millions of tonnes of radioactive tailings on the surface of the land forever.

The Lizard Bites Back will re-focus on the source of the problem, highlighting an absurd global situation where we keep mining a mineral we have no idea how to dispose of safely, whilst proposals are again being made to force nuclear waste dumps on communities that do not want them.

It will also highlight continuing community opposition to any expansion of the Olympic Dam mine. In 2012 The Lizards Revenge mobilised 500 people against the expansion of mine. Since then, that proposal has been shelved and the company has been investigating heap

leach mining as part of a cheaper expansion plan. BHP is projected to begin a heap leach trial on the current mining lease by late this year.